AFF U16: Singapore Battle Indonesia for One Point 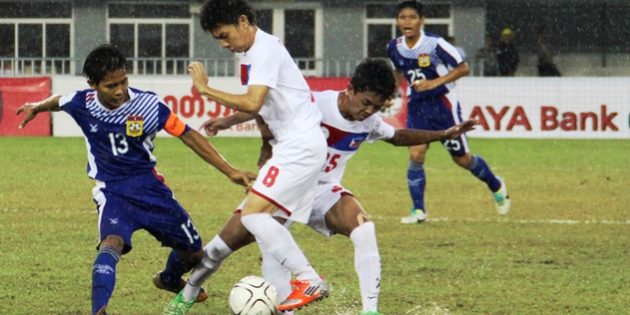 NAYPYITAW (27 Aug 2013) – The fight is still very much open for the top three teams in Group B following the 1-1 draw between Singapore and Indonesia in the AFF AYA Bank Under-16 Championship this evening at the Wunna Theikdi Stadium.

With both teams having an even chance to make into the next round alongside group leaders Malaysia, there were little hesitations at the start of the tie as Singapore pushed as hard as Indonesia could sustain the pressure.

In the ninth minute, Jordan Chan had a golden chance but with Indonesian keeper Panggih Sembodho out of position, he blasted the ball wide. Indonesia replied with a superb run from Riyanto but after beating three players, he shot it straight to Singapore custodian Kenji Syed Ali instead.

With Gatot Wahyudi unable to give Indonesia the lead five minutes later, it was Singapore who went in front when off a playback from Mohamad Shahrul Fazil in the 23rd minute, striker Muhammad Zulqarnaen Suzliman outjumped his marker to head the ball home.

Under pressure, Indonesia pushed hard but with Jujun Saepuloh coming close with a shot to the crossbar, they had to be contend for a fightback in the second half.

And Indonesia certainly did not take too long for the equaliser when in the 56th minute, Gatot finally found the back of the net with a header off a cross from Reksa Maulana.

As the game wore on, the frustrations became more obvious as referee In Htut of Myanmar flashed several yellow cards to keep tempers in check. But in the end, it did little to change the score line as it remained all the way to the end.

In the meantime, Laos paid dearly for not making their opportunities count when they fell to a 1-0 loss to the Philippines. The Philippines, who will be leaving for home early tomorrow morning, made sure that they have at least three points to their name when they struck the only goal in the game off Jeramiah Borlongan late in the second half.

Asong went on to make several crucial saves and with time trickling down and Laos thinking that they will have to settle for the draw, came Borlongan barrelling down from the left in the 88th minute for a shot to the far post to beat Laos keeper Saymanolinh Paseuth.

With the Philippines satisfied that they have at least picked up the three points, Laos will complete their fixtures against Singapore in two days at the Naypyitaw FC Stadium.