AFF U16: ROARING LIONS GIVE VIETNAM A MAULING 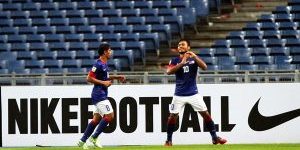 VIENTIANE (8 July 2011) – Singapore survived a major blunder in the first minute to deliver a convincing performance today in their opening AFF Under-16 Group B match against Vietnam at the National Sports Complex here tonight. A slip up in defence almost resulted in Vietnam taking an early lead but Singapore recovered to cruise away with a stunning 5-0 win tonight.

Singapore, in what was their first move forward, opened the accounts with a superb strike from skipper Adam Swandi in the 17th minute. Muhamad Azhar Ramli doubled the score in the 28th minute while Mohamad Sadik Mohd Said made it 3-0 to provide Singapore with a comfortable lead at the break.

Adam, who delivered an outstanding performance tonight, was celebrating again in the 70th minute after he squeezed in the ball during a scramble in front of the box. With three minutes on the clock, Singapore completed their rout through Muhammad Noor Fridzuan Mohd Fuad.

Singapore, who are in Group B along with Myanmar, Philippines and Cambodia, top the group thanks to their superior goal count. Cambodia, who defeated Philippines 2-1 in an earlier match this evening, are second.

Fired up by the early strike, Vietnam worked their way through into the box. Despite several attempts, the Vietnam strikers failed to breach the Lions’ defence.

Then in the 17th minute, against the run of play, Singapore charged forward and stunned their opponents. Skipper Adam Swandi let loose a crisp shot that sailed straight in and that turned out to be the start of a smashing first half for the Lions.

Muhamad Azhar and Mohammad Sadik made it 3-0 at the break with goals in the 28th and 39th minutes.

After the break, it was mainly Vietnam who were in possession but that was because they were in a hurry to get the goals. They went flat out with Le Xuan Hoa and Nguyen Chi Son coming in from the flanks and striker Pham Duc Anh forcing his way down the centre. They had numerous chances but were foiled by Singapore goalkeeper Heirus whose brave performance ended any hopes of a Vietnam comeback.

And once again, against the flow of the game, Singapore surprised their opponents.