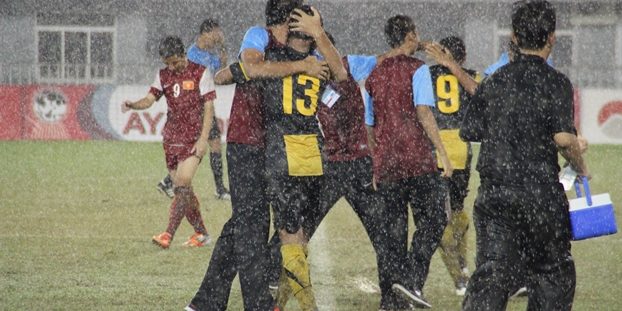 NAYPYITAW (31 Aug 2013) – The Malaysian team delivered the perfect Merdeka Day gift when a solitary strike from winger R. Dinesh put them in the final of the AFF AYA Bank Under-16 Championship 2013 here at the Wunna Theikdi Stadium.

“This is the first time that Malaysia made the final of the tournament since the start of this AFF Championship,” said S. Balachandran, the Malaysian coach. “But the boys deserved the praise for all their hard work, which is a gift to the Malaysian people considering that today is Merdeka back home.”

The heavy downpour spoiled what would have been a fine display of attacking football where in the end, both teams struggled through the mire as the ball often get stuck along the way.

There was nothing much either team could do in the first half or much of the second half as the rain continued to wreak havoc on combination play. A few mis-timed tackles and exchanges led Vietnam’s Vu Van Dung to be led out after a crash against Malaysia’s Muhammad Ghafar Abdul Rahman.

He was suspected to have suffered a hairline fracture to his left leg.

But following an innocuous cross from the right off Abang Nur’firman Abang Norazman, winger Dinesh cut in from the left for a shot that took a slight deflection from Lam Thuan before beating Nguyen Thanh Tung at the near post.

Vietnam then made a handful of substitution in the hope of pressing for the equaliser but the Malaysian defence stood their ground to make the final where they will play Indonesia in two days.