AFF U16: Malaysia and Indonesia in Semi-Finals 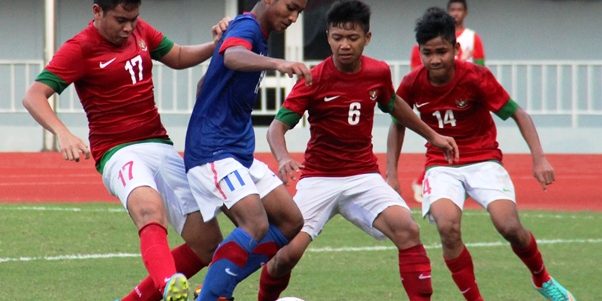 NAYPYITAW (29 Aug 2013) – A scoreless draw between Malaysia and Indonesia this evening at the Wunna Theikdi Stadium, was enough to see them making the semi-finals of the AFF AYA Bank Under-16 Championship 2013.

With fellow contender Singapore crashing to a 4-2 loss to Laos in the other match that was played at the Zayar Thiri Stadium across town, the one point was enough for Malaysia and Indonesia to finish their Group B stage on the same eight points each.

But Malaysia finished top of the group on a superior goal difference where they will meet Vietnam in the crossover semi-finals in two days while Indonesia will have to entertain Australia.

This evening at the Wunna Theikdi Stadium, both teams know what is at stake, where considering that Singapore are hot on their heels, they know that they needed to pick up the full points to confirm their place in the next round.

However, the realisation that being aggressive might also not work to their advantage, both teams were a little defensive although it was Indonesia who pushed hard at the start but both attempts from Asnawi Mangkualam Bahar and also Riyanto was cleared on the line by the Malaysian defence.

Referee Hla Min from Myanmar had a good control of the match temperament as the game got into the second half and with news trickling through from the other side that Laos had taken a healthy lead.

And by the time Malaysia earned a penalty following a red card on Dandi Abdulhak for his second yellow card offence of the game, the match had become less of a competition as Malaysia’s Abang Nur’firman Abang Norzaman meekly blasted the ball to Indonesian custodian Panggih Sembodho.

“It has been a long time since we make the semi-finals, so to make the final four teams here is very good. Now we have to prepare well against Vietnam,” said S. Balachandran, the coach of Malaysia.

Added Indonesian coach Mundari Karya: “it was a good battle between both teams but we are just glad that we made the semi-finals after having to play with ten men.”

In the meantime at the Zeyar Thiri Stadium, Singapore failed to deliver what is expected of them when they fell to a 4-2 loss to Laos.

Despite taking the early lead through Syukri Mohd Bashir in the ninth minute, Singapore could not sustained the pressure as they allowed Laos to score four goals off Sinthanong Phangvosa (34th and 75th minute), Somxay Keohanam (44th) and Laithaya Sisongkham (79th).

Singapore pulled a late second goal off Ameer Hakeen in the 88th minute but it was just a tad too late for a revival. With the loss, Singapore finished third in the group.

*Teams in bold through to semi-finals