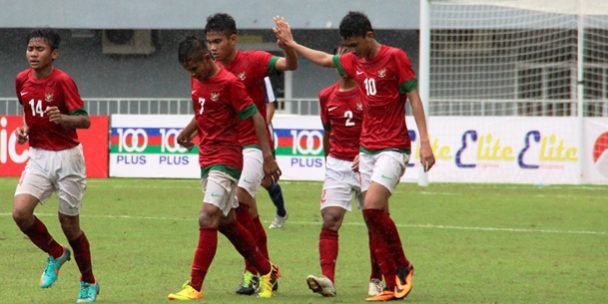 NAYPYITAW (21 Aug 2013) – Twelve goals in three matches have made this year’s AFF AYA Bank Under-16 Championship a little more exhilarating as Indonesia became the third team in the competition to score identical 4-0 victory following their win in the first game in Group B this afternoon at the Wunna Theikdi Stadium.

Indonesian coach Mundari Karya said that it was not their intention to be on the chase for either Australia or Vietnam where their aim was just to pick up the three points.

“I would not say that we had an easy afternoon. We made some mistakes as the players were playing in their first game and they were not settled,” said Mundari.

“But the goals have made the team more confident and this will be good for their second match.”

The pouring rain failed to tamper with the tempo of the game as Laos took to the field on a confident note with Somxay Keohanam leading the attack. In the 15th minute, they got a good chance to go in front but Amone Phimchanthaphone’s meek effort from inside the box was cleared on the line by recovering Indonesian defender Dandi Abdulhak.

Indonesia finally went in front in the 29th minute when off a cross from Dimas Ahmad, the failure of Laos keeper Saymanolinh Paseuth to make a clearance allowed Riyanto to score from the far post.

Gatot Wahyudi then made it 2-0 just befoer the break with a 37th minute effort for Indonesia to be comfortable going into the second half. Six minutes in, then it was Dimas’ turn to get on the score sheet as substitute Habel Siegers then made sure of the points with the fourth goal from a corner after 71 minute.

“No problem that we lost,” said Laos coach Kiyoshi Sekiguchi. “We played aggressively especially in the second half. We created a lot of chances and I believe that we can do better in the next game.”