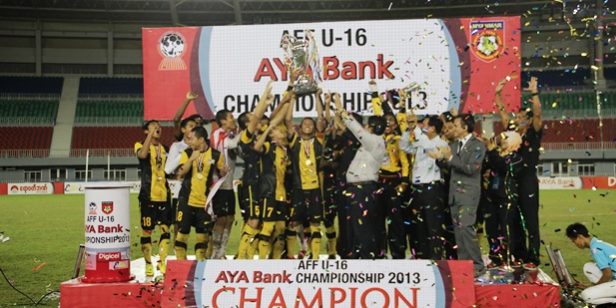 NAYPYITAW (2 Sept 2013) – Malaysia lifted their first ever crown in the AFF AYA Bank Under-16 Championship this evening when they edged Indonesia 3-2 after sudden death penalties.

The score at the end of regulation was 1-1.

“I have to thank Lim Kim Chon (the former FA of Malaysia Technical Director) for hiring me for this position,” said Malaysian coach S. Balachandran. “But the win was really the effort of the boys as they played real hard for the win.

“They have stuck to the system which has been set and they play attractive attacking football.”

The game between Indonesia and Malaysia was always going to be very close given the history of the two sides. But while the game started strongly, the slight drizzle affected the quality of the passes and then the pace of the game.

Relying more on counter-attacks as the Malaysians pressed hard at the start, it was Indonesia who went ahead in the 28th minute when striker Gatot Wahyudi ran in off a pass from Reksa Maulana to beat two Malaysian defenders as he slipped the ball past keeper Mohd Haziq Nazli.

Malaysia finished the first half with a rifling shot from Muhammad Syazwan Salihin which rocked the crossbar.

Into the second half, Indonesia did not change their formation much as they were hell bent on just defending and making sure that their opponents do not get into their box.

The game became more of a midfield battle as Malaysia attempted to cross in from either flanks. In the 88th minute, Reksa should have finished the game for Indonesia but following a cross from Dimas Ahmad and in front of a yawning goalmouth, he blasted the ball wide instead.

Barely a minute later, Malaysia got a penalty off the hard work from Muhammad Najmuddin Samat which was duly converted by Muhammad Shahrul Adnan, to force the game into penalties.

But while Indonesia managed to score the second and third kicks from Samuel Christianson and Anang Kustiawan, they gave the Malaysians the initiative when Reksa Maulana and Asnawi Bahar failed miserably.

Malaysia forced the penalties into sudden death when they tied they tied it at 2-2 off R. Dinesh and Muhammad Shahrul Mohd Adnan.

With striker Gatot Wahyudi failing from the spot, it was up to Malaysian keeper Mohd Haziq to convert his and he certainly did not disappoint when he chip the ball into goal as he led Panggih to dive to the right first.

“It was always 50-50 in penalties, but there is no shame in the loss today,” said Indonesian coach Mundari Karya. “The boys raised the level of their game in this championship and they can do only better in the AFC qualifiers.”

In the meantime, Australia emerged third in the competition when they beat Vietnam 7-6 on penalties. The score at the end of regulation was 0-0.