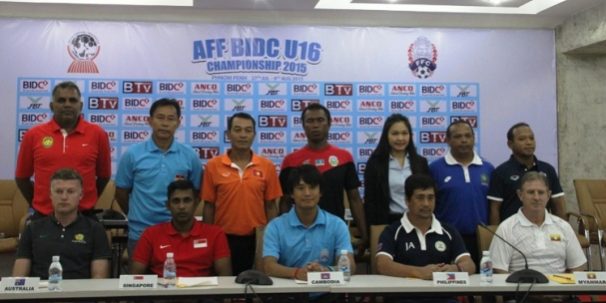 PHNOM PENH (26 July 2015) – Hosts Cambodia are ready to spring a surprise for the AFF BIDC Under-16 Championship which kicks-off tomorrow at two venues of the National Olympic Stadium and the Army Stadium.

And while Cambodia might only take to the field the day after, coach Iki Yusuke of Japan is confident that his players will give their very best in front of their home fans.

Cambodia will take on the Philippines in the opener on 28 July at the artificial turf of the National Olympic Stadium.

“We have been playing together for one and a half years,” said Iki. “I believe that we are at a good level and capable of delivering some surprises.

“And while predictions are always difficult, the one thing which is certain is that these players will play for Cambodia with everything they’ve got.”

In the meantime, the opening game of the AFF BIDC U16 Championship tomorrow will see Malaysia taking on Vietnam at the Army Stadium.

Vietnam coach Din The Nam said that results are not important at this level and where he hopes that his young players will get the proper exposure.

“These are young players, so we hope that they will good experience from playing against these teams,” added The Nam.

“We were champions two years ago (of the same tournament), but we know that it will not be easy to defend the title. We have about three weeks with this team, so we hope that we can do enough.” – P. Gunalan, Malaysia assistant coach.

“We need to test these players before the AFC qualifiers which we will be hosting (in September). We had about two weeks with these players, so we will see how much they have progressed.” – Boonlap Khenkitisack, Laos head coach

“We are here for the games and of course we want to be successful at the same time. There are some good teams here and we would like to give them a challenge.” – Augustinho Miskita, Timor Leste head coach

“We are of course pleased to be here. I hope that these young players will get the proper exposure from this tournament which will allow them to be better professionals in the future.” – Jintiya Jinarat, Thailand team manager

“This tournament will give us a chance to play against quality oppositions. We have been together since the start of the year and have played around five to six matches.” – Ufuk Talay, Australia head coach

“We have our target of course but for this tournament, we want the players to get the right competitive exposure as we are in a very tough group for the AFC qualifiers.” – V. Selvaraj, Singapore head coach

“We have been preparing well for this tournament and we are looking forward to a great competitive atmosphere. I believe that the players are all ready to show their quality.” – Jose Maria Aberasturi, Philippines head coach

“I was just appointed a week ago, so I’m here to study the teams from the region. We are of course looking at the players to perform although looking at the overall picture will be more beneficial.” – Eric Williams, Myanmar head coach

“Our target is to be competitive against all opponents. We are not only looking at the results but the overall performance. Our immediate focus is on our first opponent which is Timor.” – Muhammad Ali, Brunei head coach