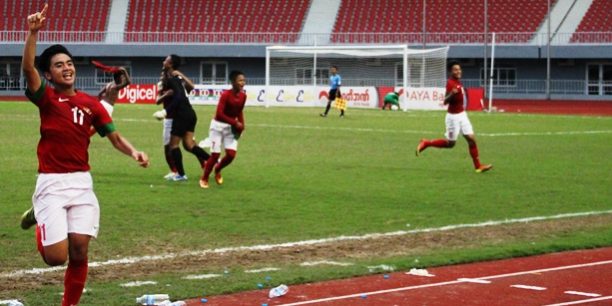 NAYPYITAW (31 Aug 2013) – Asnawi Mangkualam Bahar put Indonesia in the final of the AFF AYA Bank Under-16 Championship 2013 when his goal in the fifth and final penalty shootout in the first, semi-final gave them a well-deserved 5-4 win over favourites Australia 5-4 at the Wunna Theikdi Stadium.

The score at the end of regulation was 2-2.

“The tactic was correct when we shut down no. 16 (Joe Caletti) and also no. 19 (Daniel Maskins). But it was the team’s fighting spirit which won us the day,” said Mundari Karya, the chief coach of Indonesia after the shootout.

Having never conceded a goal all throughout the preliminary group stage, Australia were full of confidence as they look to book their place in the final this year. But Indonesia stood firm where after closing down the opposing wingers, the chances were few and far in between at the start of the first half.

Things got really moving only after Australia nailed the opener in the 31st minute when off the hardwork from Maskins, striker Jamal Reiners had the easiest of tap in.

Three minutes later, Indonesia replied with a run from Samuel Christianson but the ensuing shot from Habib Fadhilla hit the side netting instead. Australia then finished the first half with an attempt from Kosta Petratos but Indonesian keeper Panggih Prio Sembodho was equal to the task.

Indonesian then replied with the equaliser in the 55th minute when striker Gatot Wahyudi slammed in the rebound off a Reksa Maulana’s freekick, much to the delight of the few Indonesian fans watching from the stand.

Shaken and certainly stirred, Australian trudged forward in search of their second goal and in the 67th minute, they got the goal they were looking for when Cameron Joice scored from a freekick.

Over at the other end, it was Indonesia’s turn to return the favour when Reksa rifled in the equaliser ten minutes to the end.

In the penalty shootout, the scorers for Indonesia were Mahir Radja Djamaoeddin, Samuel Christianson, Anang Kustiawan, Reksa Maulana and Anang.