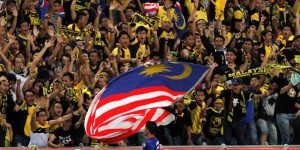 VIENTIANE  (9 July 2011) – Adam Nor Azlin ensured Malaysia shared the spoils with Indonesia when he netted the equaliser in a Group A match of the ongoing AFF Under-16 Championship here this evening. For both Malaysia and Indonesia, today’s result is their second draw in as many matches.

Indonesia had taken the lead through Indra Kelana Nasution late in the first half but Malaysia managed to draw level several minutes after the break. While both sides tried desperately to get the winner, it simply never came and both sides had to walk away with a point each.

“I am very happy with the result. Getting a point from Malaysia is good considering that we only prepared this team for less than a week,” said Mundari Karya, the chief coach of Indonesia.

“Even if we had lost the game to Malaysia, still I would not have been disappointed. The lads played really well and these are good signs for our AFC qualifiers.”

Indonesia will take on hosts Laos in their next tie in two days while Malaysia have a longer break and only play their next game, also  against Laos, in four days.

Indonesia held the edge over Malaysia in the first half. Right from the whistle, the Indonesian forwards forced their way up in search of the goals. They tried all means to get through but in the early stages were let down by some poor finishing. And even if they got through, they would be stopped by an alert Malaysian keeper Mohd Mursyidin.

As early as the eight minute, Indonesia had a sniff at goal but Zalnando’s solid header to the far left was palmed away. A slip up in defence saw Terens Owang Puhiri charge through and with only the keeper in his way, shot poorly.

But Indra Kelana Nasution got it right in the 40th minute when he headed in a rebound off the crossbar to send his team to the locker room with smiles on their faces.

“The players just did not play in the first half. I don’t know what is wrong. This is not their usual game,” added Khalid Shahdan, the chief coach for Malaysia.

“But at least we did not lose the game altogether. I think that we have the advantage as Indonesia still have to play Thailand.”