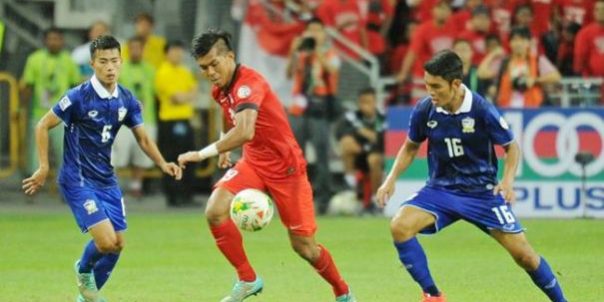 SINGAPORE (23 Nov 2014) – Thai coach Kiatisak Senamuang felt that his side was lucky to score a close 2-1 win over defending champions Singapore last night at the National Stadium.

The Thais, who had played bridesmaid two years ago, went in front after just nine minutes through Mongkol Thosakrai  before Khairul Amri equalised in the 20th minute.

But a penalty just two minutes to the end that was converted by Thai-Swiss Charyl Chappuis gave Thailand the full points – much to the disappointment of the 30,000 Singaporeans who had thronged the venue.

“We played defensively, so in a way we were lucky to beat Singapore,” said Kiatisak, who is more fondly known as Zico. “We have a young squad and they are less experienced that Singapore who are the defending champions.

“Singapore are a good team but they are not unbeatable. Now we have to look at winning our next two matches.”

With the much-maligned National Stadium showing signs of pitch recovery, the game went off from the get go as Singapore pushed hard in search of the lead.

But it was to be Mongkol who grabbed the lead when he made good on a Prakrit Deeprom cross from the right to beat Singapore custodian Hassan Sunny. Bent on winning the full points in front of their home fans, Singapore kept up the momentum through Khairul Amri and Shahril Ishak.

And in the 20th minute, Khairul headed in a superb cross from Shairul Esah to put both teams on level terms.

Several changes after the break saw Singapore gaining confidence but with just two minutes left of the game, Safuwan Baharudin was penalised for a hand ball inside the box.

Charyl did not disappoint to send Hassan the wrong way for the first full points for Thailand.