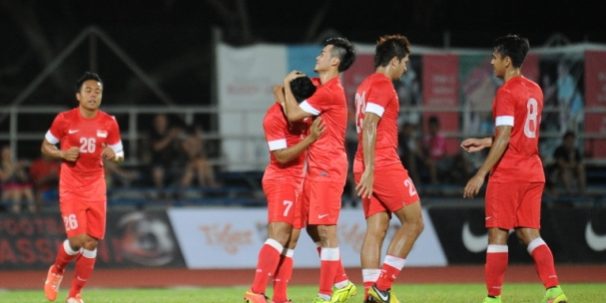 SINGAPORE (8 Sept 2014) – Singapore got their final phase of AFF Suzuki Cup 2014 preparation to a roaring start with two first-half goals to see off Papua New Guinea at the Hougang Stadium.

And while Papua were determined, it did not take the defending champions too long to open account when striker Sahil Suhaimi dribbled past three defenders in the 23rd minute before slotting the ball home beyond the reach of Ronald Warisan.

Ten minutes later Fazrul Nawaz then made it 2-0 when he latched on to a Shahfiq Ghani cross.

“Playing lower-ranked teams like Papua is never easy despite what the rankings suggest, because they are underdogs, and underdogs always want to prove themselves, and have nothing to lose,” said Singapore assistant coach Aide Iskandar.

“But this will help the team to improve for the game against Hong Kong on Tuesday.”

Despite being two goals down at the break, Papua never gave up and right at the hour mark, they finally got the goal they were looking for when midfielder Raymond Gunemba raced past two Singapore defenders before beating keeper Izwan Mahbud.

Singapore will take on Hong Kong tomorrow at the same venue.