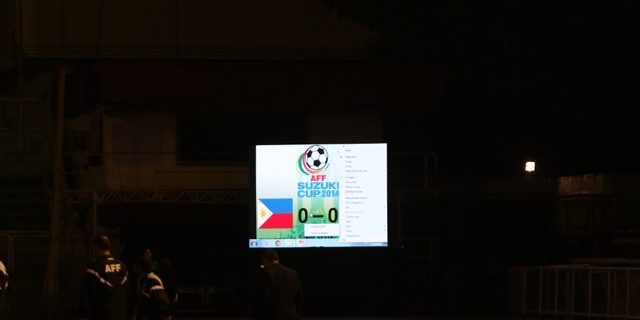 MANILA (7 Dec 2014) – Thailand, down to 10-men after star striker Adisak Kraisorn was sent-off midway through the second half, did just enough to hold the Philippines to a goalless draw in the first leg AFF Suzuki Cup semifinal match here tonight.

The Filipinos, led by inspirational striker Philip James Younghusband, threw everything they had into the game and despite creating numerous chances failed to convert any of them. After the sending off in the 69th minute, the Filipinos intensified the pressure but solid defending from the Thai defence and the keeper left the hosts frustrated.

“Before the game, I would have been happy with a draw. But after tonight’s match, I felt we deserved to have scored a goal, especially in the last 15 minutes,” said Philippines coach Thomas Dennis Dooley at the post match Press Conference. “I was very happy with my team and the way they played. It is another step forward for us. We had a good game against Indonesia and now against the Thais.”

Thai coach Kiatisuk Senamuang commented that the red card caused the team to change their strategy. “It’s not easy playing away to the Philippines, and today we played our best under the circumstances. The red card changed our game but we respect the referee’s decision. The players all worked hard and I’m pleased that we had 10 players but still managed to draw.”

Adisak had actually replaced injured first-choice striker Kirati Keawsombut in the 21st minute. Kirati suffered a hamstring injury which may also keep him out of the next match.

While the Philippines had several solid chances after the sending off, the hosts also had some good shots in the first half especially in the 42nd minute when Philip’s well struck freekick from the left was pushed out by the keeper. In the 54th minute, Daisuke Sato set up Philip but the striker was unable to finish it off.

In the very next minute, Charyl Yannic Chappuis made a blistering dash down the left and picked out Sarawut Masuk who was racing into the box from the right. To the team’s dismay, Sarawut was shade too slow and connected his shot into the side-netting.

After Adisak’s sending following an apparent clash with Amani Manuel Aguinaldo, the Philippines double their efforts, unfortunately, they were unable to secure an important goal ahead of the second leg on Wednesday in Bangkok.