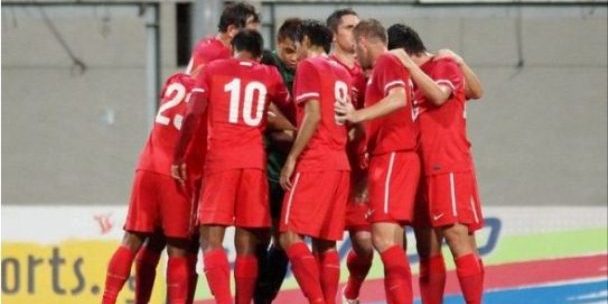 SINGAPORE (13 July 2014) – Singapore held Czech premier league side FC Zbrojovka Brno to a 2-2 draw in their first friendly of their Austrian tour yesterday.

“It was a good team performance on the whole. I’m delighted to see the best football the team has played in a year for the first 60 minutes of the game,” said Singapore coach Bernd Stange afterwards.

“We dominated, kept possession, and scored goals. But we lacked a little bit of fitness from the 60th minute onwards. We had to slow down and play more defensive football.

“But I think 2-2 is a fair result as both teams played on the same level, and we had an entertaining match which was fast-paced and of very high intensity. It is a good result but we expect tougher games ahead for the reminder of the trip.”

The Lions looked unfazed in the opening exchanges against the Czech side, with the defence off Baihakki Khaizan, Hariss Harun and Hassan Sunny coping well whenever FC Brno were in possession.

Although both sides created a hatful of chances although it was Singapore who drew first blood in the 43rd minute, when Shahril Ishak displayed some excellent footwork to set up Khairul Amri for a finish to beat keeper Martin Dolezal.

FC Brno won a penalty early in the second half which Pavel Mezlik made no mistake from the spot to bring the score to 1-1.

Singapore took the lead again at the hour mark when Faritz Hameed raced down the right hand side and sent a perfectly-weighted cross to Shahil Suhaimi, who nodded the ball past the goalkeeper.

However, the Lions were unfortunately unable to keep the lead when Tomas Brigant scored a long-range shot into the top corner in the 90th minute for the game to tie 2-2.