AFF SUZUKI CUP: Booth to concentrate on own team 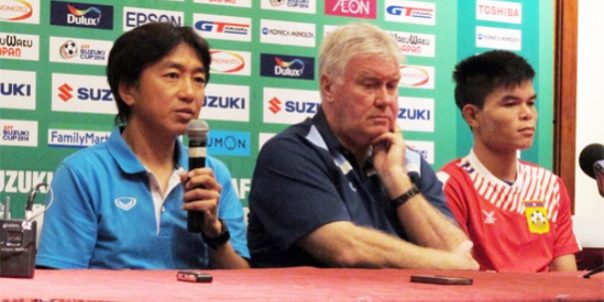 HANOI (24 Nov 2014) – David Booth, the head coach of Laos, is not too bothered by the hard-hitting form of hosts Vietnam where his main concern would be to raise the level of his team several folds ahead of their clash tomorrow evening at the My Dinh National Stadium.

Laos had fallen to a 4-1 loss to the Philippines in their opening Group A match which saw Booth fuming at the untypical performance of his lads.

“The first game (against the Philippines) was very disappointing. We did not play our usual game,” said Booth. “It will be very difficult against Vietnam, they were playing very well against Indonesia.

“But for me, it is far more important that I concentrate on our situation and how we can be better than thinking about what Vietnam will bring. I hope that the big crowd will spur our boys.”

In the meantime, Vietnam coach Toshiya Miura is taking more positives than negatives from the Indonesian tie for their clash against Laos.

Vietnam took the lead twice against Indonesia but had to be content with the 2-2 draw following two defensive errors.

“We got one point from the first game, so the second match will be even more important if we want to make the next round,” added Miura. “We created a lot of chances against Indonesia but we conceded mistakes. There were certainly more positives than negatives which we take for the next match against Laos.

Vietnam captain Le Tan Tai, who were left on the bench against Indonesia, said that he was not too disappointed at not being given any playing time.

“It is always down to tactics and there should not be any disputes as to the decision of the coach,” added Tan Tai. “I was disappointed with the draw but I thought that we played really well.”