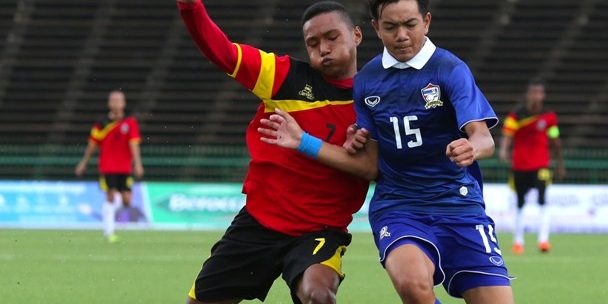 PHNOM PENH (13 July 2016) – Defending champions Thailand made a confident start to their title defence in Group B of the AFF Smart Under-16 Championship when they blasted Timor Leste 3-0 as hosts Cambodia powered past Brunei 2-0 in the second game of the day.

The Thais, who were taking to the field only on the fourth day of competition today, were all fired as Peerapat Kaminthong blasted in a one-timer just two minutes into the game.

Despite falling behind, it failed to ignite Timor into action as they seem unable to build on their win over Brunei two days earlier.

That gave the Thais all the reason they need to exert control as they then doubled the advantage just seven minutes later when Korawich Tasa came in from the left to beat Timor keeper Natalino Soares for the second time in just under ten minutes.

In full control, Thailand continued to press hard and off a long cross from deep for Peerapat was unfortunately headed into goal by Timor defender Nelson Reis.

With the score 3-0 to Thailand’s advantage at the start of the second half, head coach Chaiyong Khumpian made several substitutions to change the pace of the game.

“The first match is always difficult but I am very satisfied that the players stood their ground early for the goals,” said Chaiyong.

“We still have three more matches to play for so it is important that we rotate. I hope that we can defend the crown although my real target is the AFC U16 Championship later this year.”

In the meantime in front of more than 15,000 fans, hosts Cambodia showed that they are not to be trifled with as they played a patient game to beat Brunei 2-0.

In stark contrast to the fast-paced match they played two days earlier in their 3-1 victory over Laos, the homesters played a more patient game to score a goal in each half for the win.

Sean Sopheaktra grabbed both goals where in the 38th minute, he headed home the cross from Sieng Chanthea before nailing the second with a volley in the 76th minute, following a playback from Tun Somchhai.

“It was a very competitive match but we had to be more tactical.”

Timor Leste (in red/black) vs Thailand (in all blue)

Brunei (in yellow/black) vs Cambodia (in blue/white)

Brunei (in yellow/black) vs Cambodia (in blue/white)