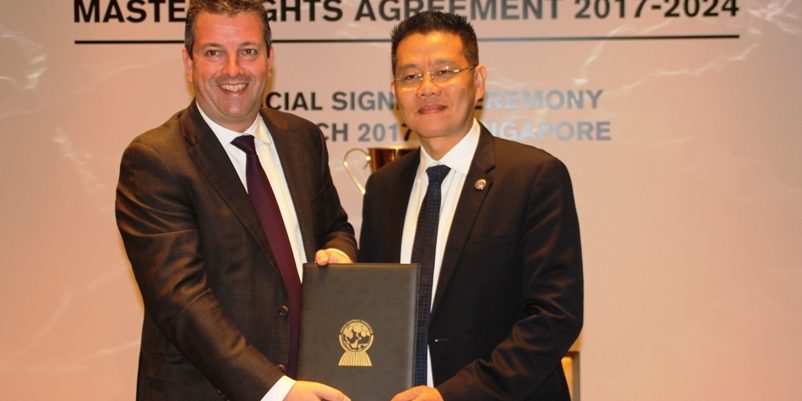 Contested by the national teams of Southeast Asia, the biennial tournament boasts unrivalled TV ratings, sold-out stadiums, and the most passionate fans in the region.

The new contract terms were awarded following a successful partnership cycle with Lagardère Sports from 2009 to 2016. The new deal will see Lagardère Sports manage the exclusive marketing and media rights for Southeast Asia’s premier men’s A national team competition in 2018, 2020, 2022 and 2024.

To provide more exposure for the players in their home country and drive greater fan engagement, a new format will be introduced for the upcoming cycle of ASEAN Football Championship events.

Starting from the 2018 competition, the Qualifying Tournament will evolve to a new format that will see the two lowest-ranked ASEAN teams playing off against each other, with the winner joining the top 9 ranked countries in the final round.

Each Group will now comprise five teams, with each team playing two matches at home and two matches away. The Semi-Finals and Finals format will remain home-and-away matches played over two legs.

This means throughout the course of the tournament, there will be more home matches held in every participating country which will further enhance established rivalries.

“Lagardère Sports has proven to be an excellent partner for the promotion of the competition, and they have helped us build the stature of what is today an iconic tournament. We are delighted that the relationship will now continue well into the next decade.”

“Football continues to be the number one sport in the region, and high profile competitions such as the ASEAN Football Championship offers compelling touchpoints for fans and players alike,” said AFF General Secretary, Lt. General Dato’ Sri Azzuddin Ahmad.

“I am confident that this new deal will help us grow the profile of the sport and build towards our overall mission to raise footballing standards regionally.”

“We have celebrated 20 years of working with the ASEAN Football Federation, and the relationship continues to grow from strength to strength,” said Tom Smith, President, Football – Asia, Lagardère Sports.

“Our partnership with the AFF has been as enjoyable as it has been fruitful, and the results over the past two decades speak for themselves. Lagardère Sports is fully committed to fulfilling the goals of the AFF in delivering ever greater excitement about football in our region.”