AFF LAUD THE EXCELLENT COOPERATION FROM THE INDONESIAN POLICE FORCE 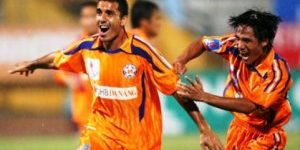 JAKARTA (30 Dec 2010) – The Asean Football Federation closed another successful chapter of its blue riband event – the AFF Suzuki Cup 2010 – lauding the excellent cooperation from the  Indonesian  police force in ensuring the safety of the two teams and also that of the general public at the massive Gelora Bung Karno Stadium last night.

The eighth edition of the biennial championship came to a close this week with Malaysia emerging as the new champions when they emerged victorious over the two-legged finals at two venues which saw the attendance of more than 200,000 fans.

With such high numbers of spectators, the successful organisation of the matches would not have been possible without the cooperation from the police force from both sides.

As the Asean football family congratulate first time winners Malaysia following their win over hosts Indonesia, it is pleasing to note that both countries have taken extra precaution in ensuring that safety is the utmost on the agenda when the finals were held over two legs, in Kuala Lumpur and also in Jakarta.

These steps in providing added security at the team hotels and also at the stadiums have brought the level of the organisation of AFF matches to a whole new level.

In Jakarta, the provision of giant screens outside the playing arena saw the number of spectators rose to more than 120,000 which added pressure to the band of over 9,000 police personnel on duty.

Further measures had to be taken in guaranteeing the safety of the visiting team, in this case Malaysia where other than providing added security at the team hotel, they were also transported in armoured personnel carrier to the stadium.

While it might not be a comfortable short five minute ride to the Gelora Bung Karno, still safety was the most important factor which had to be considered.

As promised, the several entrances to the main stadium were fully controlled by the Indonesian Metropolitan Police where their vigilant inspections of spectators ensured that the majority of the prohibited items like laser emitting devices, flares and fireworks were not brought into the stadium.

Sparse incidents did take place but for the most part, the fans at the stadium were generally well behaved as such the AFF would like once again to extend their congratulations to the Indonesian Police Force on a job well done.