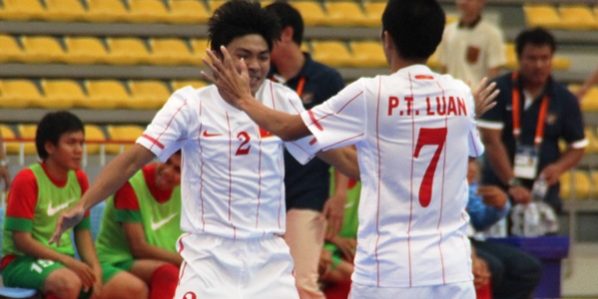 BANGKOK (27 Oct 2013) – Vietnam finished third in the AFF Miracle of Life Futsal Championship 2013 when they beat Indonesia 7-3 in the classification match at the Bangkok Thonburi University Stadium.

The score at the end of the first half was 3-2 to Vietnam’s advantage.

“Finishing third is not quite winning the tournament but it has definitely put us in a good stead for the SEA Games in December,” said Sergio Gargelli, the coach of Vietnam.

Just two minutes into the game, Indonesia’s eagerness for the lead saw Vietnam stealing to the front when Vu Xuan Du scored off a quick counter-attack. In the tenth minute, Vietnam again found the back off Ly Khanh Hung as Xuan Du then put them comfortable at three goals in front two minutes later.

Just before the break, Indonesia slammed in two quick goals off Ardy Dwi Suwardy (16th and 20th minute) as they were left to mull what went wrong in the first half and how they can get back into the tie.

“We are still making mistakes which we should not have,” added Indonesian coach Andri Irawan. “But this tournament has shown that we need those players whom we have left behind in order for us to be more competitive.”

In the second half, Vietnam absorbed whatever Indonesia threw at them before adding to the score line through Khanh Hung (30th), Phung Trong Luan (35th), Tran Van Vu (37th) and Pham Thanh Dat (39th).

Indonesia got their only goal after the break through Bambang Saptaji in the 38th minute.