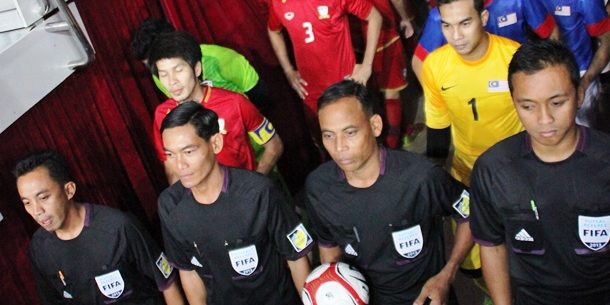 BANGKOK (22 Oct 2013) – Vietnam had to survive a scare when they came back from two goals down to beat Brunei 4-2 in a Group B tie of the AFF Futsal Championship here at the Bangkok Thonburi Stadium.

Brunei showed while they are not at the same level yet against their better-known opponents, it will not be easy to take the points or pile the goals on them.

“When we start the game with the wrong mind set, this is what happen,” said Vietnam coach Sergio Gargelli. “The passes were not there and the defending was also a problem. We conceded that early two goals and we had to fight hard to win this game.”

With the crucial match against Thailand coming up tomorrow, the start could not have been worse for Vietnam when Muhammad Naqib Timbang punished Vietnam’s lackadaisical defence early in the third minute.

A minute later and  it was 2-0 for Brunei when off a long pass from goalkeeper Muhammad Nabil Maidin, the waiting Fakhri Bangkul flicked the ball over Vietnam custodian Dang Phuoc Anh.

In the 18th minute, Tran Hoang Vinh gave Vietnam the lead as Phung Trong Luan then put the score 4-2 at the half with another goal in the 19th minute.

In the second half, Brunei played gallantly to deny Vietnam further additions to the tally as the score remained all the way to the end.

On the other hand, Malaysia showed that they have made big stride in improving their quality when they conceded just a 2-0 loss to eight-times ASEAN champions Thailand.

The Malaysians were not in any way over-awed by the occasion as they shut down Thai super star Suphawut Thuenklang and Kritsada Wongkaeo. But mid-way through the first half, a second yellow card offence saw Mohd Khairul Effendy Mohd Bahrin being shown the red card by Cambodian referee Sopheak Saing.

“We made it hard, really hard for Thailand. I’m proud of the players even though I’m not too happy with the results,” said Malaysian coach Marcelo Serpa. “Now we will just have to concentrate to win our next match to ensure that we get the last ticket to the AFC Futsal Championship next year.

There really was no shame in defeat for the Malaysians where after holding the Thais scoreless at the end of the first half, Jetsada Chudech managed to squeeze in the ball past Malaysian keeper Mohd Firdaus Razali in the 26th minute.

Five minutes later, Kritsada then doubled the lead for Thailand to ensure the homesters the full points from three matches.

“It was a very close game but we showed that we had that bit more quality to win the full points,” added Thai coach Victor Hermans.

With the win, Thailand and Vietnam have already qualified into the semi-finals of the championship.