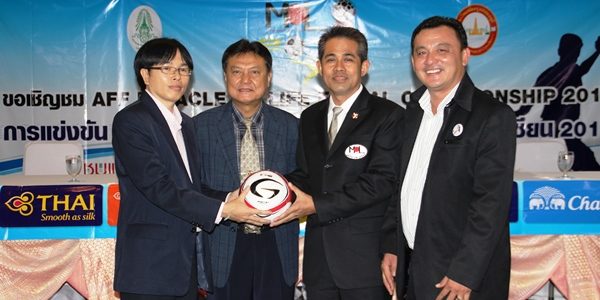 BANGKOK (18 Oct 2013) – This year’s AFF Futsal Championship will be more than just about who can win the bragging rights as the best in ASEAN as there will also be the added incentive of being among the best five teams in the region to make into the AFC Futsal Championship in 2014.

Thailand and Vietnam are already through to the AFC Futsal Championship in 2014, which means that will be three additional spots for the rest of the competing teams to fight for.

Powerhouse Thailand –the eight-time champions of the AFF Futsal – earned an automatic berth into the AFC tournament next year by virtue of being the runners-up in the previous editions of the AFC Futsal Championship in UAE in 2012.

Vietnam gained safe passage in 2014 considering that they will be the host nation.

And with Timor Leste and the Philippines out of contention since they did not submit their entries for the 2014 edition, this means that effectively, there will be the remaining six teams vying for three available spots.

“Based on the performance in previous editions, we are quietly confident that we can make the cut (for AFC Futsal in 2014),” said Vito Basile, the team manager of Australia. “But Futsal is a game which we must be in the ‘on’ mode all the time otherwise; the opponents can win the game.

“Our preparation has not been what it should be due to logistical reasons but we are trying hard. We played against Bangkok FC last night and this evening we will have another match against Port Authority.”

“We are very optimistic for a place in the final,” said Indonesian team manager Basar Simanjuntak. “We have been preparing for this tournament since the start of the year and we already have at least 80% seasoned campaigners in the team which means that we are full ready.

“It will be an important first game for us when we take on Timor Leste tomorrow.”

“We are taking it a game at a time,” said Marcelo Serpa, the chief coach of Malaysia. “We will have a tough opener against Vietnam and this is one game which we need to start well.

“The team has been improving a lot but still we need a lot more consistency. It is certainly a good chance for us to qualify for the AFC Futsal Championship in 2014.”

In the meantime, Timor Leste will be hoping to spring a surprise in the tournament. Chief coach Bruno Torres said that the team has been in preparation for the last three months.

“We have not been able to play any competitive matches except for games against local sides back in Timor,” added Torres. “I hope that we can do better than what we have shown in the last few tournaments – that is important and perhaps spring a surprise or two.”

“We just got off from the pre-SEA Games tournament where we finished third,” said Myanmar team manager Kyi Min Thein. “We are looking to improve of course and fight for a place in the AFC tournament next year.