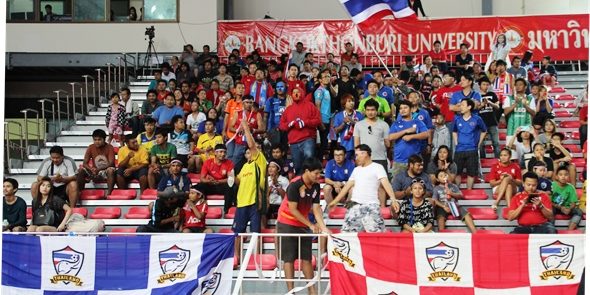 BANGKOK (23 Oct 2013) – In a match which was worthy of a final, Thailand showed that they are still the team to beat when they blasted Vietnam 6-2 in the crucial tie to win Group A of the AFF Miracle of Life Futsal Championship that was played this evening at the Bangkok Thonburi University Stadium.

Despite missing several players, the Thais still managed to show their prowess to score four goals in the second half following the 2-2 draw at the break.

“It was my mistake to allow the less experienced players to play towards the end of the first half. That allowed Vietnam to come back from two goals down,” said Victor Hermans, the coach of Thailand.

“But at the break, I told them that we need to win this and so we put back the regulars and we got four goals.”

Backed by a boisterous several thousand loyalists, Thailand began strongly but only carved out the lead in the ninth minute when Kritsada Wongkaeo slammed in the lead off a corner from Suphawut Thueanklang.

But Vietnam did not give up and in the 15th minute Nguyen Bao Quan nailed the first goal off some hesitant Thai defending while Tran Van Vu then drew level two minutes later for a 2-2 draw at the half.

Into the second half, Thailand pulled out all the stops as Kritsada completed his hat-trick with two goals in the 25th and 29th minute as Jirawan grabbed his second in between.

With the win, Thailand will take on Indonesia in the cross-over semi-finals in two days while Vietnam will play Australia.

In the meantime, Malaysia earned the fifth and final ticket to the AFC Futsal Championship 2014. This follows their 17-2 win over the Philippines in their last Group A match.

With this year’s AFF meet being used as the qualifying event for AFC, the Malaysians will join Thailand (runners-up in 2012), Vietnam (2014 hosts) and the two other semif-finalists – Australia and Indonesia – for the AFC meet next year.

Malaysia were up against Myanmar to win the berth as the best third-placed team today and they certainly played to expectations following their strong performance against the Thais yesterday.

“We have met our target of qualifying for the AFC championship next year,” said Malaysian assistant coach Maizal Marzuki.

With Myanmar having blanked Timor Leste 10-0, the Malaysians needed to score at least nine goals to guarantee their ticket to the AFC event in the middle of next year.

And they certainly did not have to wait too long to slot in the first goal where after Muhammad Shamsul Akmar Zamri slammed the lead in the very first minute of play, the game was all Malaysia.

The scorers for the Philippines were Pasilan Sevilla in the 25th minute and Jovanie Simpson in the 32nd minute.