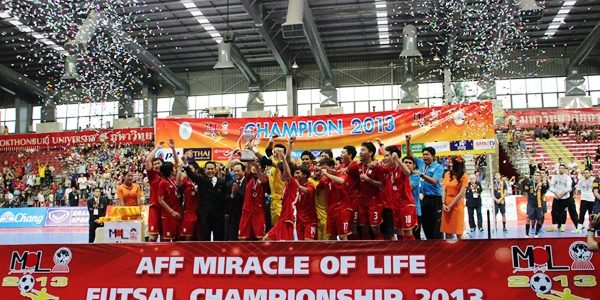 BANGKOK (27 Oct 2013) – A double from Suphawut Thueanklang gave Thailand their ninth ASEAN crown when they beat Australia 2-1 in the final of the AFF Miracle of Life Futsal Championship 2013 that was played this evening at the Bangkok Thonburi University Stadium.

With the tournament this year being used as a qualifying round for the AFC Futsal Championship next year, Thailand’s victory proved that they will still be the team to beat at the SEA Games this December.

“Of course everyone have their eyes on the SEA Games and we are no different but we showed that we are still dominant in the region,” said Victor Hermans, the chief coach of Thailand after the win.

“For the SEA Games, I think that we can go to Myanmar with just ten players from this current squad here plus several others who did not come for this meet.”

Backed by a crowd beyond the 6,000 capacity of the stadium, the Thais started strongly as they controlled possession to pushed Australia back into their own half.

Relying more on catching the Thais at the break, the Australians were content just to sit back and absorb the continuous onslaught. But in the 13th minute against the run of play, Suphawut rounded off Australian keeper Peter Spathis before scoring to give the Thais the well-deserved lead.

Thailand kept up the pressure all the way into the second half as Kritsada Wongkaeo hit the upright and then the crossbar twice before the home team finally carved the second goal of the game.

In the 26th minute with Australian keeper Angelo Konstantinou out of position, Suphawut just slammed the ball in from the midfield. Towards the tail end of the tie as Thailand can already sniff the air of celebration, Australian finally pulled a late goal through Jarrod Basger.

But it was just a tad too late to deny Thailand their ninth ASEAN crown.