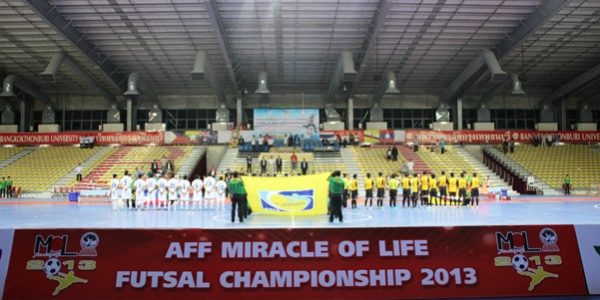 BANGKOK (19 Oct 2013) – The Philippines took the lead in Group A when they disposed of Brunei 5-3 in the last match of the evening as Vietnam edged Malaysia 2-1 in an earlier tie of the AFF Futsal Championship 2013.

It was as pulsating a match as could be between the Philippines and Brunei with both teams eager to win the points. And while it was Brunei who pushed hard earlier on, it was the Philippines who grabbed the lead through Arnie Pasanibo in the 13th minute.

The score at the end of the first half was 1-0 to the Philippines.

Pasilan Floriano was quick to double Philippines’s lead just a minute after the restart before Brunei got their scoring act together to score their first goal of the game in the 22nd minute through Maziri Maidin.

Then it was three quick goals for the Philippines with Pasilan nailing a double (26th and 36th minute) and another from Jovanie Simpron (36th minute.

Brunei staged a late revival through Mohamad Arif Haji Eisa in the 36th minute as Maziri then completed a brace with a second strike two minutes later.

“We created a lot of chances but it was just too bad that we could not score,” said Brunei coach Mohd Yunos Mohd Yusof.

In the meantime, Vietnam beat Malaysia 2-1 in an earlier match in the group.

With the Malaysians needing to win to better their chance of qualifying into the AFC Futsal Championship in 2014, it was Vietnam who scored against the run of play through Pham Thanh Dat in the seventh minute.

Some sustained pressure from Malaysia saw Pham Thanh Tuan turning the ball into his own net before Vietam then scored what was the winner off Vu Xuan Du in the 14th minute.

“It was always going to be close,” said Malaysian coach Marcelo Serpa after the match. “With the loss today, we just have to make sure of the points from the remaining games.”