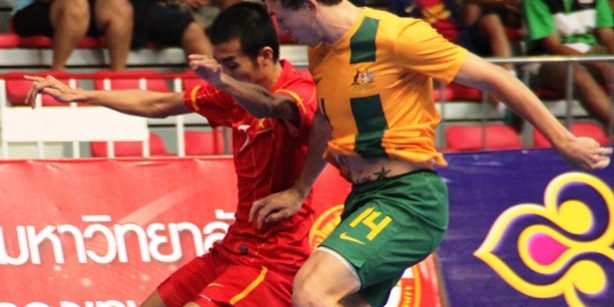 BANGKOK (25 Oct 2013) – Australia stayed true to form book to destroy Vietnam 6-1 in the second semi-final to set up the final clash against hosts Thailand in the AFF Miracle of Life Futsal Championship 2013.

The score at the end of the first half was 4-0.

“Vietnam are definitely more organized as they have a year-long programme as compared to us who only train once a week,” said Australian Steven Knight.

“The plan was to shut down several of their offensive play and then pressure them. It worked and we are in the final.”

Vietnam were all eager at the start of the match but it was Australia who grabbed the lead early in the third minute when Daniel Fogarty slammed in the rebound off a freekick from Tobias Seeto.

Six minutes later and Australia are two goals up with an exquisite chip from Fernando de Moraes as Adam Cooper (16th minute) and Gregory Giovenali (19th) then made it 4-0 at the half.

With one leg in the final, the Australians were more patient as Vietnam grew more desperate. And while Vietnam managed to pull a goal back from a power play when Tran Hoang Vinh scored in the 27th minute, the move also proved risky when Australia capitalized to score two more goals at the end.

Fogarty completed his hat-trick with goals in the 35th and 36th minute.