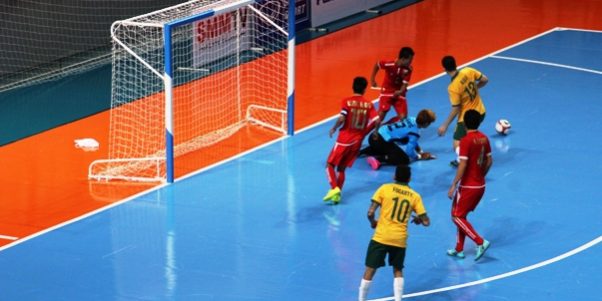 The Aussies netted all three goals in the first half but were unable to crack their opponents defence after the break.

Coming into this competition as one of the hot favourites, a more convincing performance was expected but Australia did enough to collect full points.

Daniel Fogarty popped in the opener in the 10th minute while Wade Giovenali followed up with two quick strikes in the 14th and 15th minutes to seal the Group B tie.

Myanmar had a better run after the break and pulled one back through Khin Zaw Lin in the 22nd minute.  With the loss, Myanmar dropped down to third with Vietnam – who had the day off today – moving up to the top of the table on head-to-head.

Myanmar will be battling to finish amongst the top two teams in the group to try and make the cut for the Asian Futsal Championships next year. Only the top four teams from this tournament will make their way to Uzbekistan.

After the first few preliminary matches, the battle in Group B appears to be a three-cornered fight between Australia, Myanmar and Vietnam.

Australia (in yellow / green) against Myanmar (in all red)

In the second Group B match today, Laos, who were whipped 13-1 by Vietnam yesterday, scored a solid 10-3 win over the Philippines today.

The Phillipines were on mark through Pasilan Floriano Jr Sevilla, who scored twice, and Mabanag Jerremy.

Philippines (in all blue) against Laos (in all white)