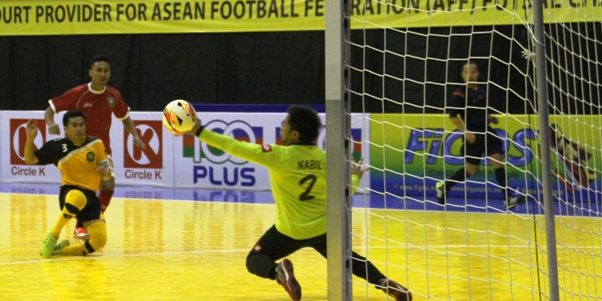 SHAH ALAM (19 Sept 2014) – VIETNAM had a grand start on the opening day of the AFF Futsal Championship today when they whipped Myanmar 6-1 at the Malawati Stadium. The Vietnamese players sealed the win in the first half where they scored five goals.

Despite the big margin, it took Vietnam a good ten minutes of trying before they struck their first goal in the 11th minute through Ngo Ngoc Son. Before Myanmar could even recover, Vietnam pressed on and were rewarded with a second goal the following minute, this time from Le Quoc Nam.

Vietnam were fired up by the goals and attacked furiously. In the 14th minute, they struck again, through Tran Long Vu. Worse still for Myanmar, Pyae Phyo Maung was sent-off after arguing with the referee.

In the 16th minute, Vietnam scored two quick goals in succession through Quoc Nam and Thai Huy to give Vietnam a comfortable 5-0 lead at the break.

After the break, Myanmar mounted a better defence and managed to keep their rivals at bay. Myanmar went one step further when they scored through Pyae Phyo Maung (3) in the 21st minute. Despite Myanmar’s best efforts, Vietnam’s Ly Khanh Hung  managed to sneak in a goal in the 34th minute.

In the opening match of this tournament, Timor Leste were gifted with an own goal from Brunei in the 31st minute of the match. Ak Muhammad Naqib Pg Timbang inadvertently turned the ball in his own net during a quick raid by the Timor players.

Brunei bravely charged back and had a few close encounters but were unable to make their shots count. And in a quick counter-attack, Timor’s Fernando Baptista Xavier raced down the right and whipped it into goal in the 39th minute.