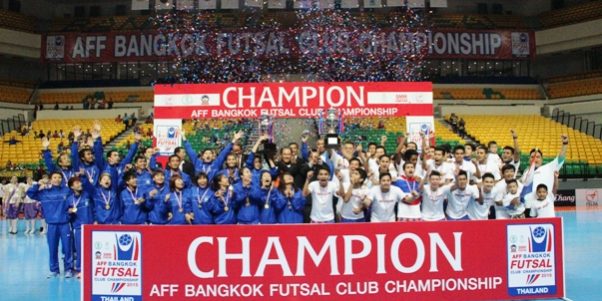 Brazilian Thiago De Oliveira gave Thaiport the best of start with the first goal of the game early in the very first minute of play.

Rattled, Felda shored up their defence to hold Thaiport to just the 1-0 lead at the break.

But Marcos Mendonca then ran through the Felda defence for the second goal in the 25th minute as Jetsada Chudech then flicked in the third goal of of the game two minutes later with a wicked back heel.

Pornmongkol Srisubseang the slammed in the fourth goal at the half hour mark as Apiwat Chaemcharoen then punished Malaysia’s power play with the fifrth right at the end.

Thaiport (in all blue) against Felda United (in all orange)

IN THE MEANTIME, MIC FC of Myanmar sprang a surprise on Australia’s East Coast Heat FC to come in third in the competition when they beat the latter with two late goals to win 4-2.

Pyae Phyo Maung was the toast for MIC with a hat-trick (4th, 19th and 37th minute) with another from Okkar Kyaw (39th).

In between, Raymond Miller (7th minute) and Jordan Guerreiro (29th) was on target for East Coast Heat.