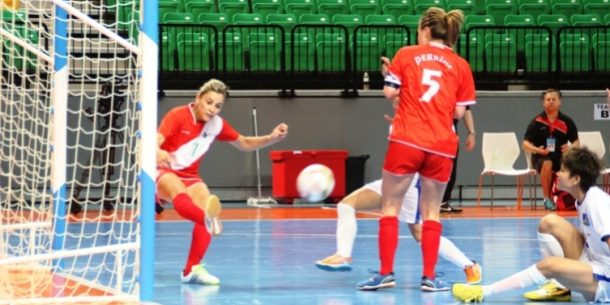 BANGKOK (24 Nov 2015) – Defending champions Thai Son Nam FC sent a clear warning this morning that they will be the team to beat when they picked up their second win of the AFF Bangkok Futsal Club Championship 2015 with a close 1-0 win over Durral Warriors.

Thai Son Nam had begun their title defence yesterday on a confident note when they overwhelmed Felda United 8-0.

But Durral from Australia is a different kettle of fish altogether when they defended in numbers to press Thai Son Nam for much of the first half.

And while livewire Sarah Yatim was a handful throughout the exchange, a quick counter in the 33rd minute from Thai Thi Thaoa allowed Nguyen Thi Chau to slip the ball past Tani Louise Rosekelly.

IN THE MEANTIME, Felda United women’s team put up a much improved performance from yesterday’s bashing but they still could not prevent Thailand’s Asian Scholar from winning the tie 4-0.

Two goals in each half were enough to do the trick for Asian Scholars which featured a handful of Thai national players including the well-known Orathai Srimanee.

Felda were stubborn for much of the first half before Orathai opened account with two quick goals in the 16th and 17th minute.

Boosted with confidence, Asian Scholars then pushed into a higher gear after the break for Nipaporn Sriwarom and Rattikan Thongsombut to find the back of the net in the 26th and 36th minute respectively.

Asian Scholars (in all yellow) against Felda United (in all blue)