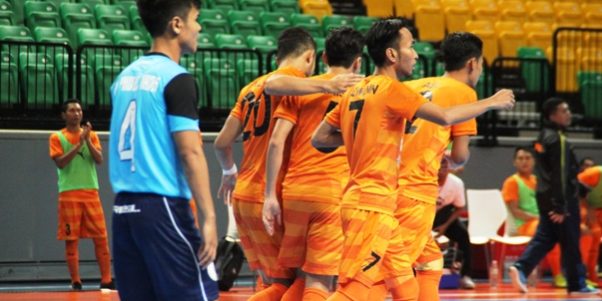 BANGKOK (25 Nov 2015) – The men’s team of Felda United and Thaiport picked up their second win in the on-going AFF Bangkok Futsal Club Championship 2015 as they look to set up a mouth-watering clash on Friday.

Sanna Khanh Hoa, who had conceded a draw and then a loss in their first two matches, were desperate for the three points as they pushed hard at the start.

But Felda played the patient game as they had done against East Coast Heat on the first day of competition with Mohd Azwan Ismail nailing the opener after just three minutes.

The first half ended on even 2-2 when Phan Khac Chi blasted in the second goal for Sanna Khanh Hoa.

Felda’s Nurnaim Abu Nangin then slammed in the third goal in the 23rd minute before Mohd Azwan finished things off with his second right at the end.

IN THE MEANTIME, Thaiport edged East Coast Heat FC 3-2 to pick up their second of the tournament with veteran super star Lertchai Issarasuwipakorn delivering the winner late in the second half.

Christopher Zeballos had given East Coast Heat the best of start with the lead after just three minutes before Thai international Jetsada Chudech equalized for Thaiport with a cheeky back heel in the eighth minute.

Jetsada was once again on target in the 13th minute as Shervin Adeli then gave East Coast Heat the second equaliser right at the half hour mark.

And just when East Coast thought that they had at least a point in the bag, Lertchai’s stiff grounder had Peter Spathis well beaten.