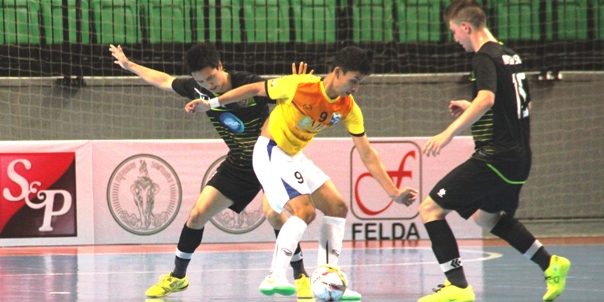 BANGKOK (27 Nov 2015) – MIC FC denied Sanna Khanh Hoa FC a place in the next round of the AFF Bangkok Futsal Club Championship 2015 when they held East Coast Heat FC to a 1-1 draw.

MIC went into the final, decisive game of the group today on the same two points with Sanna Khanh Hoa of Vietnam while East Coast Heat only had the motivation of maintaining their spot with having lost out of a place in the final.

But MIC were fully motivated for the task at hand and while they absorbed East Coast Heat’s offensive play for long periods, they rightly went ahead in the 18th minute off a quick counter from Pyae Phyo Maung.

However, just two minutes after the restart Grant Lynch found the space and time to slot home the equaliser as both teams shared the spoils.

And while East Coast Heat finished third in the group, MIC leapfrogged to finish fourth while Sanna Khanh Hoa were unfortunately shown the exit.

IN THE MEANTIME, Thaiport FC emerged as group winners when they edged Felda United men’s team 3-2 in the final game of the evening.

In a game which had little consequence other than to determine the first and second team in the group, both teams rested key players in preparation for their final clash in two days.

But that does not mean that the game was any less exciting as neither were showing signs of slowing down.

The end to end action finally saw Apiwat Chaemcharoen scoring the decisive winner a minute to the end after.

Earlier Thaiport had found the back of the net twice through Pornmongkol Srisubseang (17th and 37th minute) a Felda replied through Ahmad Fawzul Mohamad in the 22nd minute and then Nurnaim Abu Nangin five minutes later.

Thaiport (in all blue) against Felda United (in all orange)