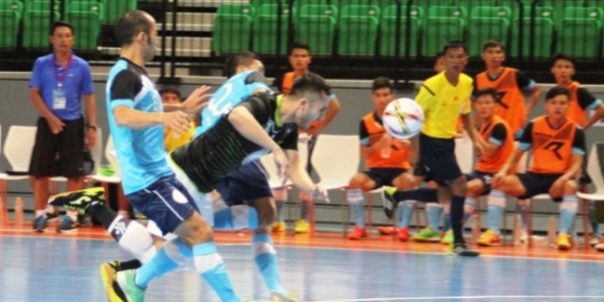 The Australians who were frustrated with a 4-1 loss to the men’s team of Felda United yesterday, were a lot more composed this time round as they used their physical advantage to full effect.

But Sanna were not about to lie down and let Heat trample all over them as they put up some stiff resistance for much of the first half before Lachlan Wright slotted home the lead with a minute left on the clock.

Into the second half and Sanna, who were held to a disappointing 1-1 draw by MIC FC yesterday, pushed hard through Nguyen Thanh Hung but they just could not find the last touch as Shervin Adeli then added two more goals in the 30th and 35th minute for the 3-0 lead.

Sanna then managed to pull a goal back off Phan Dang Boa in the 38th minute but that was the best they could muster as the score stayed all the way to the end.

IN THE MEANTIME, Thai Port made a smashing debut to the championship when they blasted MIC FC 4-0.

With an array of stars from a variety of Thai clubs that saw the inclusion of super stars including Lertchai Issarasuwipakorn and also Jetsada Chudech, the Thai side was just unstoppable.

And even though they took a while to crack their first goal of the game through Thananchai Chombun in the 14th minute, they were really never in danger of losing control.

Brazilian Marcos Mendonca doubled the advantage two minutes later as Thai Port trooped off confident into the second half.

Jetsada popped in the third goal on 25 minutes as Thananchai rounded things off with the fourth goal three minutes to the end.

MIC FC (in yellow / blue) against Thai Port (in all blue)