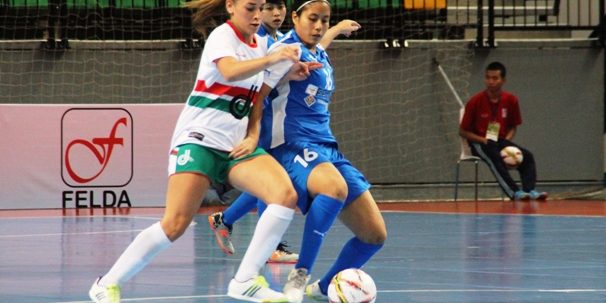 BANGKOK (27 Nov 2015) – Dural Warriors will take on Thai Son Nam in the final of the AFF Bangkok Futsal Club Championship 2015 when they beat Felda United women’s team 2-0 in the final round robin tie this morning at the Bangkok Arena in Nong Chok.

The Australian girls, who were battling Asian Scholars of Thailand for the chance to play in the final and lift the crown this year, were a more composed side as they maintained discipline and rarely allowed the Felda girls a crack at goal.

Asian Scholars, who will play ACE FC of Myanmar later this afternoon to complete their group fixtures, were hoping that Felda would do them a favour and beat Dural.

But it was not to be as Samantha Nagy punished some lackadaisical Malaysian defending to take the lead after 11 minutes.

Felda tried to get back into the game after the break but they just can’t seem to find their way through as the inspirational Sarah Yatim then slotted the second goal with a minute left on the clock.

IN THE MEANTIME, Asian Scholars delivered what was expected of them as they thrashed ACE FC 4-0 to finish third in the group.

In a game which already sealed the fate of ACE FC who will return home tomorrow, Asian Scholars turned on the power early in the second minute through Darika Peanpailun.

The win saw Asian Scholars cementing their third spot finish in the group where they will take on Felda United for the classification third/fourth placing on Sunday.