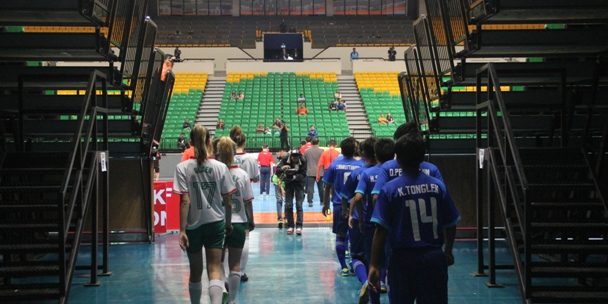 BANGKOK (25 Nov 2015) – On the day when defending champions Thai Son Nam FC booked their place in the final of the AFF Bangkok Futsal Club Championship 2015, Dural Warriors sprang a surprise to beat home favourites Asian Scholars 2-1 to brighten their chance of a place in the next round.

Dural from Australia, who had conceded an unlucky 1-0 loss to Thai Son Nam just the day before fought bravely this evening against a side which featured a handful of Thai national players.

But the Thai girls were not easily put down and with just a minute left of the first half, Orathai Srimanee struck in the ball from the left which came off Rosekelly and into goal.

Dural burst into the second half with full vigour and just Rachel Perrins slammed in the ball just two minutes in to put the score back on level terms.

From then on, it was a game of nerves as both teams tried to get the better of the other for that elusive winner. And it eventually came – for Dural.

With just a minute left on the clock, a long pass from deep was headed over by the wily Sarah Yatim and into goal.

Asian Scholars (in all blue) against Dural Warriors (in white / green)

IN THE MEANTME, Thai Son Nam had another easy workout in the morning when they blasted Myanmar’s ACE FC 4-0.

Pham Thi Tuoi was on the double with goals in the 19th and 35th minute as Trinh Nguyen Thanh Hang (15th minute) and then Nguyen Thi Thanh (27th) finished things off at the end.