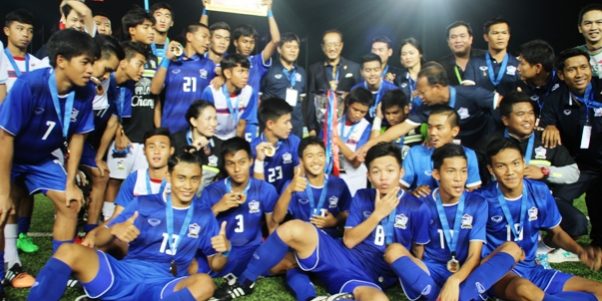 PHNOM PENH (9 Aug 2015) – Thailand won the AFF BIDC Under-16 Championship 2015 when they beat Myanmar 3-0 in the final that was played here tonight at the National Olympic Stadium.

Buoyed by their win over Australia in the semi-finals two days earlier, the Thais were bursting with confidence as scored once in the first half before adding two more after the break for the convincing victory.

“We worked hard for this win as you know, we did not have a lot of time to prepare but with the cooperation from the various clubs we were able to bring the players, coaches and team officials together for this tournament,” added Thai team manager Jintiya Jinarat.

“And of course with the support of the FA of Thailand, we cherish this which should contribute to the overall development of these players.”

Considering what was at stake in the final, the match did not exactly took off with no holds barred as both teams were tentative, looking for the chance to go forward.

But with Myanmar being a little more defensive then they usually were, it allowed Thailand more possessions and more opportunity to get into the box.

Pichitpon Noyutai was a danger as always from the centre of the pitch with his probing runs and where he tested Myanmar goalkeeper Htet Wai Yan Soe in the 21st minute with a firing shot from the edge of the box that had the letter fully stretched.

And while captain Hassawat Nopnate narrowly missed the target with a turning shot sometime later, there was no stopping Thailand from carving the lead in the 41st minute when Sittirak Koetkhumthong’s looping header off a corner had Yan Soe well beaten.

Myanmar came out more after the break as they pushed forward in numbers  but neither Win Naing Tun nor Hein Htet Aung could get into the final quarter and trouble Thai custodian Wutthipong Thiangthae.

Nine minutes to the end, Myanmar were punished yet again with another set-piece when Natthapong Nakpitak headed in the corner from Hassawat.

A minute later, Jinnawat Russamee then capped a fine evening for Thailand when he ran through the Myanmar defence down the left flank before firing past Yan Soe for the third time in the night.

Myanmar (in all red) vs Thailand (in all blue)

Myanmar (in all red) vs Thailand (in all blue)

VIPs before the prize giving ceremony

VIPs before the prize giving ceremony

Match officials for the final match