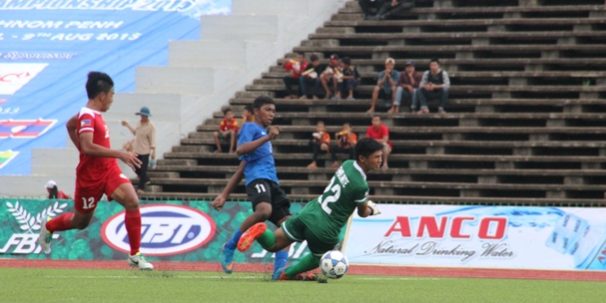 PHNOM PENH (30 July 2015) – As Singapore picked up their first full points in Group B of the AFF BIDC Under-16 Championship tonight, hosts Cambodia were handed with some harsh lesson when they fell to a 4-0 loss to Australia at the National Olympic Stadium.

Singapore had fallen to a 3-1 loss to Myanmar in the group opener two days earlier, were a little out of sort at the start of their game against Philippines this afternoon.

And the Philippines who were also looking for their first three points of the competition following their 1-0 loss to Cambodia in their first game, were a lot more confident as they pressed Singapore hard.

It did not take them long to carve out their first goal of the game in the 17th minute when off a Jericho Sinconiegue’s corner, Singapore defender Akram Azman turned the ball into his own net.

But the second half was all Singapore as just nine minutes after the restart, a cross from Muhammad Fikri Junaidi was slotted home by Khairul Hairee Abdul Hamid.

In the 75th minute, Philippines custodian Jessie Semblante’s goal was beaten again when Rezza Rizky Yacobjan blasted in the rebound after Khairul’s earlier attempt was blocked.

And by the time Philippines midfielder Rei Sergio Cordova was given his marching orders following his second yellow card offense, the game was already over as Singapore added two further goals right at the end.

“Morale was down after the loss in the first match but we regrouped,” said Singapore coach V. Selvaraj. “We did better in this game and we won.”

In the meantime, Cambodia just could not find the right formula against a physically superior Australian side as the former went down to a 4-0 loss.

Any hopes of an upset in front of close to 20,000 faithful who braved the drizzling rain at the National Olympic Stadium was dashed when Lachlan Brook fired in the lead after just two minutes of play.

From then on, Australia never looked back as they shut down Cambodian play as fast as they lose the ball which threw the game off for the hosts.

Tried as they could through the hardwork of Sieng Chanthea and Soun Sophoutra from either flank, they did little to trouble Australia as the latter then went on to score through Jacob Italiano (31st minute) and Brook’s second of the game (45th) for them to be comfortable 3-0 lead at the break.

Australia took their foot off the pedal into the second half as they took out Italiano and Brook to give Rahmat Akbari and Ahmed Sweedan a run.

While Cambodia changed to a more attacking formation, the Australian backline stood firm before they added another goal off Sweedan right at the death.

“It is never easy to play against the hosts and in the first half, they sat deep. That forced us to try and break down their defence,” added Australian coach Ufuk Talay. “The first early goal gave us confidence and it is really great to start the tournament with a win.”