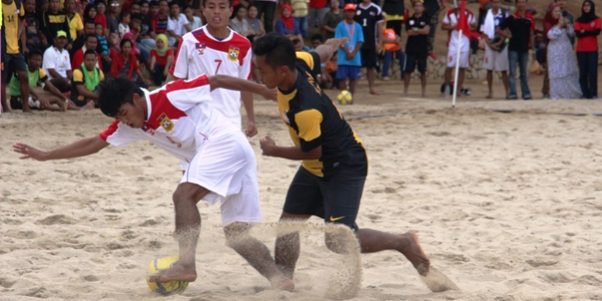 KUANTAN (24 Oct 2014) – Laos and Vietnam delivered surprises on the second match day of the AFF-Felda Beach Soccer Championship when they beat their better known opponents here at Teluk Chempedak in Kuantan.

The Laotians, who have had to bear with the absence of a beach to train on, showed that all that matters in the game was the mindset and in spite of the vociferous home crowd took the lead through Khounsombath Phommaxay right at the end of the first period.

The Malaysians replied through Mohd Riduwan Mohd Nor just three minutes into the second period but there was no holding back Laos as they thumped in two more goals Phithack Kongmathlath (10th and 11th minute) just at the end.

It was more intense into the third period as the Malaysian tried hard to get back into the match but they fell further behind early just a minute in when Laos scored through Khitsakhone Champathong.

And while Malaysia did pull a second goal in the eighth minute through Mohd Jamil Daud, there was no way back for the hosts as they now have to win their last game against the Philippines tomorrow if they want to be in the semi-finals.

With six points, Laos is not safe yet where they will need to beat Myanmar in their final Group B game for a place in the next round.

In the meantime, Vietnam edged tournament favourite Indonesia 6-2 in Group A to put their disappointing loss to Thailand yesterday behind them.

For Indonesia, their thumping 10-2 victory over Felda the previous day put them in an over confident mood. They were to pay the price early in the first period when Vietnam struck four times off Bui Tran Tuan Anh (4th and 7th minute) and Tran Vinh Phong (6th and 11th minute).

The score at the end of the first period was 4-1 to Vietnam as Made Antha Wijaya pulled a goal back in the 5th minute.

Vietnam piled two more goals in the second period off Tuan Anh (2nd) and Vinh Phong (8th) to put them in a comfortable position as late charge from Antha Wijaya (5th) failed to ignite further fight back in the third period.

Indonesia will be looking to beat Thailand in their final Group A match to book their place in the next round while for Vietnam they are also within a chance of a place in the semi-finals if they can beat winless Felda.