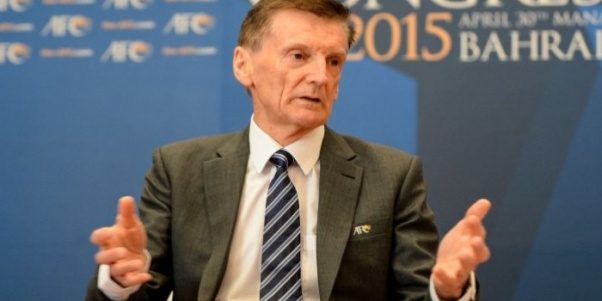 DILI (29 April 2015) – Asian Football Confederation Technical Director Andy Roxburgh has met with members of the media to outline his plans for the development of the Asian game ahead of Thursday’s 26th AFC Ordinary Congress in Bahrain.

During the informative and well-received roundtable at Manama’s Gulf Convention Centre, Roxburgh, who has held similar roles with both UEFA and the Scottish Football Association, touched on a variety of topics including his intent to build on the footballing foundations already in place throughout Asia, as well as the need for a sustainable, long-term vision that will help continue the development of Asian football.

“In a football sense, Asia’s potential is enormous and it is a great challenge for someone like myself to be involved in it now and it is clearly something that I find interesting, challenging and exciting,” explained Roxburgh, who first visited Asia to work in China in 1985 and who has since conducted courses in countries such as Saudi Arabia, Malaysia, Singapore and Japan.

“In my previous jobs (at the SFA and UEFA) I was a foundation builder, but the good fortune I have this time is that I am not the first. I am now following other colleagues at the AFC who have already been building that foundation. What I am trying to do is to continue that evolutionary process and add a bit more to those foundations.”

Roxburgh while highlighting the need to continue the AFC’s commitment to developing football at the grassroots level, added: “We need (in Asia) to have top leagues, top players, top coaches and better results. But how do you do that?

“The training of the coaches and the youth and grassroots programmes that are in place are vital for the long-term health of the game (in Asia).”

During his time with Europe’s governing body, the former Scotland manager is credited with, among other things, setting up the framework for the UEFA Convention on the Mutual Recognition of Coaching Qualifications and initiating the UEFA Grassroots Charter which urged UEFA members to invest more in grassroots football.