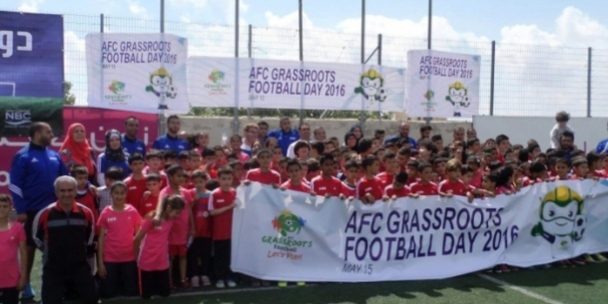 DILI (15 May 2016) – A record-breaking 37 Member Associations (MA) have pledged to celebrate the Asian Football Confederation (AFC) Grassroots Football Day on Sunday, May 15, setting a new benchmark up from the 31 MAs who participated last year.

In total more than 60,000 football enthusiasts of all ages and abilities from across the continent will participate in grassroots activities organised by MAs, an increase of more than 60% from 2015. The new record indicates the significant strides and growth of grassroots football in recent years: the inaugural AFC Grassroots Football Day in 2013 was celebrated in 13 Member Associations.

AFC President Shaikh Salman bin Ebrahim Al Khalifa said: “Grassroots football represents the foundation and basis for the game to thrive and flourish. The annual AFC Grassroots Day was initiated to drive and strengthen the foundations of the game and I am heartened to note the impressive progress made by our Member Associations since 2013.”

“I would like to thank all of our MAs and stakeholders for working tirelessly to organise these vital opportunities and programmes for players of all ages to discover the joys of  football.”

“The AFC’s Vision and Mission has reinforced our commitment to further develop grassroots football as we seek to ensure football remains the most popular sport in Asia”, he added.

From the women’s game to youth, amateur, disability and veteran football, Member Associations of all sizes and stature will be driving various aspects of the grassroots game, which has been defined by the AFC as ‘all football which is non-professional and non-elite’.

More than 22,000 players in China PR will take part in the ‘Enjoy the Game’ National Amateur Championship and grassroots training camps for children and veterans. The Guam Football Association, with the total population of the country at just over 160,000, will be organising a grassroots tournament for 1,100 boys and girls from ages six and above.

The AFC’s commitment to grow the grassroots movement in Asia has been further strengthened this year with the introduction of the Grassroots Charter at the inaugural AFC Grassroots Conference in March. The newly-formed AFC Grassroots Panel also held its first meeting in February and will seek to spread the message throughout the continent.