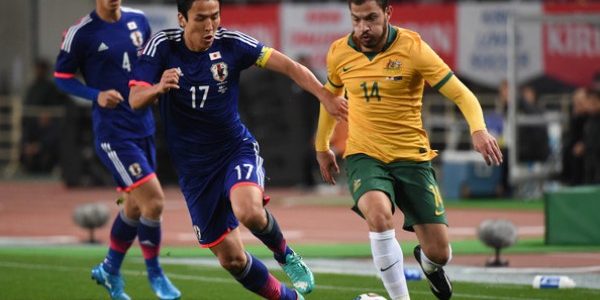 SYDNEY (20 Nov 2014) – Reigning AFC Asian Cup champions Japan emerged victorious over Australia once more on Tuesday as they claimed a 2-1 friendly win in a rematch of the 2011 final.

Following a goalless first half at the Nagai Stadium, the Samurai Blue broke the deadlock in the 61st minute when Keisuke Honda’s corner sailed over a sea of players and fell kindly to Yasuyuki Konno, who emphatically planted his header into the roof of the net.

Seven minutes later, the hosts doubled their lead as Shinji Okazaki beat Mat Ryan with a lovely back-heel finish, after Masato Morishige had embarked on a determined run down the right and crossed the ball into his path.

To their credit, the Socceroos refused to give in and managed to pull one back in injury-time when Tim Cahill met a left-wing cross with a trademark header into the top corner, although it proved to be a mere consolation as Japan held out for the win.

The result also means the Japanese now are unbeaten in their last five meetings with Australia, which includes the 1-0 extra-time triumph in Doha on January 29, 2011 that saw them become Asian champions for a record fourth time.

The Australians, hosts of the AFC Asian Cup 2015, will kick off proceedings when they take on Kuwait onJanuary 9 before playing Oman and Korea Republic in Group A.

Japan are in Group D and will face off against Jordan, Iraq and Palestine for a place in the knockout round.