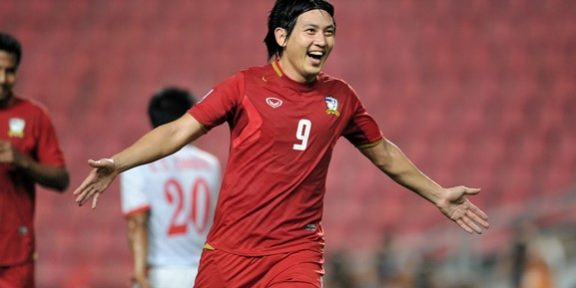 BANGKOK (22 Dec 2012) – Striker Kirati Kaewsombut’s header right at the end of the first half gave Thailand a hard-earned 1-0 lead over Singapore at the break in the second-leg, finals of the AFF Suzuki Cup tonight here Supachalasai Stadium.

Needing to score at least two goals for them to lift their fourth crown, the Thais pressed Singapore for much into their own half and came close with an early effort that rocked the crossbar.

But after some sustained pressure and with the Singapore defence on the lax as they look to the breather, a corner from hardworking midfielder Jakkapan Pornsai was headed into goal past Singapore custodian Mohd Izwan Mahbud.