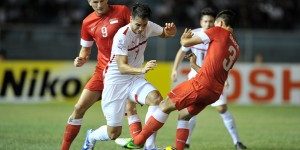 SINGAPORE (27 June 2011) – The Singapore Under-16 team finished second behind CR Flamengo Under-15 when they lose 4-3 on penalties in the final of the 23rd Lion City Cup yesterday.

The score at the end of the regulatory 90 minutes was 0-0 with the side from Brazil emerging victorious.

“The team managed to get good experience from this tournament and they played well. We missed a few chances but we kept working” said Takuma Koga, the chief coach of the Singapore U16.

In the meantime, the Singapore U15 team emerged third when they beat Juventus FC U15 side 4-0 in the game played earlier.