Kai on the Double for Buriram 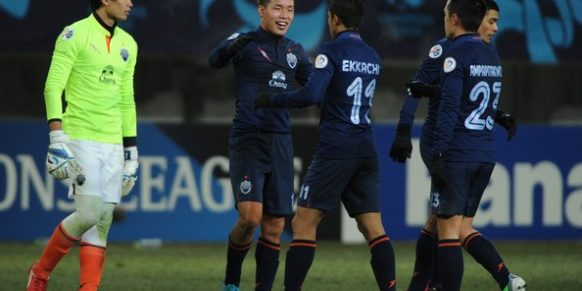 BANGKOK (2 May 2014) – Buriram United licked their wounds in commanding style following their exit from the group stage of the AFC Champions League to beat fifth-placed Chonburi FC 2-0 in the Thai Premier League (TPL) at home at the New I-Mobile Stadium this week.

The 2013 quadruple champions (Kor Royal Cup, Thai Premier League, Thai FA Cup and Toyota League Cup) have now refocused their energy on defending the titles they won last season after shown the exit from the group stage of the AFC Champions League 2014.

Last season, Buriram had made the quarter-finals of the AFC Champions League.

Two goals from Kai Hirano, the first off a cross from Theerathon Bunmathan’s cross and then another from a quick counter attack, made sure that the side from the north east of Thailand moved up to 12th in the standings.

In the meantime, leaders Muang Thong United maintained their position at the top of the table with a 4-2 victory over Samut Songkhram at the Army stadium.