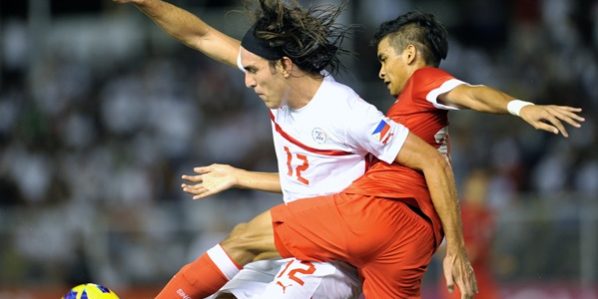 MANILA (8 Dec 2012) – The thriller in Manila did not quite take place tonight as the Philippines were held to a scoreless draw by a resilient Singapore side in the first-leg, semi-finals of the AFF Suzuki Cup tonight at the Rizal Memorial Stadium.

Playing in front of a sell-out crowd, the match was a long time coming for the Philippines following their inability to host the same semi-final tie two years ago when they had to face Indonesia twice in Jakarta.

But despite being buoyed by the presence of more than 15,000 screaming fans, the Philippines just could not break through the Singapore defence ably marshalled by Baihakki Khaizan and Daniel Bennett.

Philippines went on the offensive from the get-go as they pressed the Lions for much in their own half in the first quarter of an hour. In the 21st minute, Phil Younghusband carved out the first real chance of the game but his meek attempt fail to beat Singapore custodian Izwan Mahbud.

Five minutes later, Singapore replied when Aleksandr Duric floated in a cross that even though had Eduard Sacapano beaten, just could not find Shahril Ishak at the other end.

With the score tied at the half, both teams made changes to their line-up as the midfield battle raged on. In the 73rd minute, Paul Mulders fired in a free kick that narrowly missed the upright while some moments later, an exchange took place between Dennis Cagara and Fazrul Nawaz for the latter’s awkward challenge.

As the clock trickled down, the inevitable seemed to dawn on the Philippines with the wasted chances they had the whole night long as they will now have to look at a better performance for the return tie in mid-week.

For Singapore, the ball is in their court and it is theirs for the taking at the already sell-out venue of the Jalan Besar Stadium.